Earlier this month, I featured Dorothy Ours’s book Man o’ War: A Legend Like Lightning here on the Sir Barton Project. That book became one of my essential sources for writing Sir Barton & the Making of the Triple Crown and author Dorothy Ours herself became a valuable and welcome friend to the project as well, providing answers to a plethora of questions over the last few years. Today, I wanted to lead off my series profiling authors of these wonderful books on racing with a few questions for Dorothy. Here are her Author Answers!

END_OF_DOCUMENT_TOKEN_TO_BE_REPLACED

If you ask any horse racing fan, they can tell you the moment that solidified their love of the sport. Perhaps it’s Secretariat “moving like a tremendous machine” in the 1973 Belmont Stakes. Maybe it’s catching a day of racing with a relative when they were kids. It could even be a book or a movie that captured their imagination. For me, that moment was the 1988 Kentucky Derby and the beautiful roan filly that brought home the roses that day.

END_OF_DOCUMENT_TOKEN_TO_BE_REPLACED 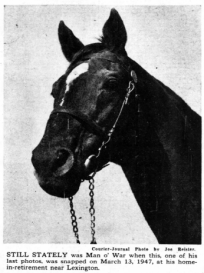 By September 1920, Man o’ War had no competition left. He had faced all of the best three-year-olds in races like the Preakness, the Dwyer, and the Travers Stakes, and beaten them all. In the process, he had demonstrated overwhelming superiority, winning by many lengths and setting records nearly every time he went to the barrier. Of course, he had not run against older horses — yet.

What if? Fans asked. What could he do against his elders? Speculation abounded about which of the older horses racing could possibly be Man o’ War’s better.

END_OF_DOCUMENT_TOKEN_TO_BE_REPLACED 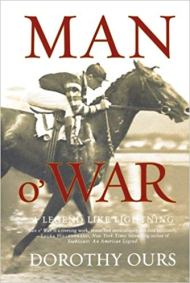 Over the last century, Man o’ War has dominated the lists of the best horses of the 20th century, claiming the imaginations and hearts of racing fans everywhere. His burnished red coat and distinctive blaze are well known to even the most casual of fan alongside tales of his titanic speed and overpowering wins. As a fan of Walter Farley, I read his novel about Man o’ War; falling in love with racing meant that I had heard those same stories of his dominance familiar to anyone who loves thoroughbreds. When I started working on Sir Barton’s story, I knew I would have to delve deeper into the careers of both my horse and his big red rival. One of the first books I picked up to research the match race and all that lead up to it was Dorothy Ours’s Man o’ War: A Legend Like Lightning. What I found in Ours’s book was more than a recounting of Man o’ War’s exploits: it was an exploration of the rich context that both created and benefitted from the champion that set the standard for every horse that followed in his wake.

From the first, this book sets up the stories of the people behind the moments that made Man o’ War. She opens with glimpses at Johnny Loftus, H.G. Bedwell, August Belmont, Louis Feustel, and Samuel Riddle, introducing you to these major players with context that helps you understand how small decisions play into big moments. Johnny Loftus’s honesty, steadfast in the face of unsavory influences, is part of his fame and fortune, but also contributes to his downfall. Ours’s anecdote from the first chapter pays off later in the book, when you see just how much it matters that Loftus was honest almost to a fault. Man o’ War’s story is not just the speed records and overwhelming dominance that he displayed under rider. It is also in these behind-the-scenes glimpses into the people who decided when and where he would run.

In the 1920 Lawrence Realization, Man o’ War set a world record for a mile and five-eighths, besting the old record by nearly two seconds. Owner Samuel Riddle had originally ordered that the colt would run freely only during that last quarter mile, but his wife Elizabeth persuaded her husband to let Man o’ War run as he wished throughout the entire thirteen furlongs so that the crowd could see what the colt truly could do. While Samuel Riddle might have been the face that people saw, his wife’s influence, brought to the fore by Ours’s storytelling, was as much of a force behind this great red racer as her husband.

Anecdotes and details like these are what makes Man o’ War: A Legend Like Lightning an essential read for any racing fan, whether you are new to the game or have loved racing for years. We all know the legend, but Ours gives you more than that. She gives you the rest, the moments and memories that made Man o’ War and his time so essential to the history of this sport. The richness she adds to his story is why I wanted to make this book the first one I would profile in my countdown to the publication of Sir Barton and the Making of the Triple Crown. In addition to the fountain of information Ours’s work became for my book, it also provided an engrossing reading experience I have been happy to return to over and over.

You can buy Man o’ War: A Legend Like Lightning at Amazon or Barnes & Noble and other booksellers. Find Dorothy Ours here on Facebook and Twitter. 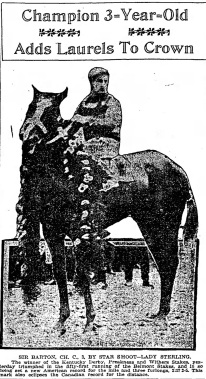 In 1919, a colt named Sir Barton dazzled everyone with wins in the Kentucky Derby, the Preakness Stakes, and the Belmont Stakes. This trio of victories changed the sport of horse racing in the United States forever, evolving into the Triple Crown, one of horse racing’s most elite accomplishments.

In 2019, horse racing will celebrate the 100th anniversary of his domination of the American classics, duplicated only twelve times since. From Gallant Fox to Citation, Secretariat to Justify, we will celebrate the pioneering horse whose accomplishment a century ago helped to make the horses that followed him household names.

In May 2019, Sir Barton’s story comes to a bookseller near you, told in full for the first time. From his royal pedigree to his unusual final resting place, learn about America’s first Triple Crown winner and his human connections, from his ambitious owner to his controversial trainer to the Hall of Fame jockeys that guided him to victory after victory. Follow Sir Barton and Man o’ War through their historic 1920 seasons, culminating in a match race in an unexpected place.

Here on the Sir Barton Project, I will count down to the release of Sir Barton and the Making of the Triple Crown with a weekly series of blog posts. Each month, I will profile a book on horse racing and its author, covering a variety of the sport’s iconic personalities. You will find more on Sir Barton and his era, posts that preview what you will find in the book. As a long-time horse racing fan, I will also share my own memories of the sport I love. As we await the 2019 Triple Crown season, please join me here each week in this run-up to the 100th anniversary of Sir Barton’s accomplishment.

Sir Barton and the Making of the Triple Crown will be brought to you in May 2019 from the University Press of Kentucky.