Eternal had had enough of Sir Barton. As the day of the mile-and-an-eighth Dwyer bloomed gloomy with the summer rain, Kimball Patterson, the colt’s trainer, took the weather as a sign that perhaps it was time to say when. Eternal had faced Sir Barton three times in 1919 and all three times the son of Star Shoot had gotten the better of the juvenile co-champion of 1918. Sir Barton was simply the better of the two now.

Almost a month after his Belmont Stakes victory, Sir Barton was still a perfect four-for-four in 1919. After reeling off all of his victories in only 32 days, the winner of what we now know as the first Triple Crown had had a break, but now was ready to face the barrier for the Dwyer, Commander Ross eager to add another laurel to his champion’s resumé. The rain had driven all but two other horses from facing Sir Barton on July 10, 1919. Crystal Ford was clearly out of his element, but, hey, with only three horses in the field, the colt was bound to win some money. The show, though, belonged to Sir Barton and Purchase, two colts on hot streaks that begged for something extraordinary to happen.

END_OF_DOCUMENT_TOKEN_TO_BE_REPLACED 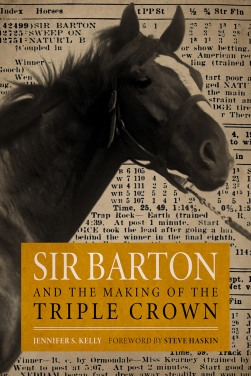 It’s July 4th weekend! Summer is already half over, but you still have plenty of time to kick back, relax, and enjoy some downtime before you get back to the grind. What better way to enjoy your free time this weekend than with Sir Barton? I will be around the Lexington/Frankfort area on July 5th and 6th. I hope you will come by, say hi, and talk all things Sammy and racing!

If you can’t make it out to the Lexington/Frankfort area, why not pick up a copy of Sammy’s story for your beach reading? Sir Barton and the Making of the Triple Crown is available from your favorite bookseller or library. If your library doesn’t carry the book, you can request it.