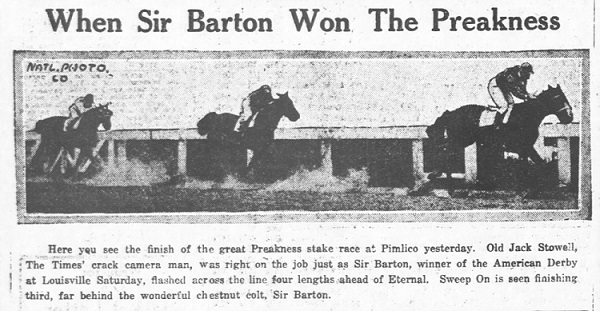 When he crossed the finish line first in Louisville on May 10th, Sir Barton earned himself a trip to Baltimore and Pimlico for the Preakness on May 14th. It was a path that only four other horses had taken before him, but the $25,000 purse made the 600-mile trek worth it. With only four days separating the two races, it was a big question mark for H.G. Bedwell and J.K.L. Ross whether or not the chestnut colt could duplicate his Derby victory, but they seemed willing to try. Sir Barton was put on a train and shipped to Baltimore as soon as possible after his Derby victory. Stablemate Billy Kelly, who had finished second in the Derby, was not eligible for the Preakness because he was a gelding so the connections decided to send the good filly Milkmaid with Sir Barton instead.

Johnny Loftus was back on Sir Barton’s back for the Preakness and Earl Sande, the Ross Stable’s contract rider, had the mount on Milkmaid. The track was fast this time and Sir Barton carried the full 126 pounds, no longer running with the benefit of the maiden allowance. Supporters of horses like Eternal thought of Sir Barton’s performance in the Derby as a fluke, that the maiden allowance or the muddy track explained the whole thing. This was a one-off like other horses who just happened to run their best race that day and then never again. They were wrong, though: Sir Barton was no flash in the pan.

He proved it from the start of the Preakness. Sande and Milkmaid were there to help ensure that Sir Barton would get a good start since another starter, Vindex, tended to be fractious at the barrier. If Sir Barton looked to be compromised in any way, then Sande was to shake his mount up so that the starter wouldn’t be able to drop the barrier. This had to be done, though, without the judges catching him so Sande wouldn’t get in trouble. Finally, the field was still enough for the barrier to lift and the race to begin.

Sir Barton shot to the lead and, much like the Derby, never relinquished it. He was a length ahead of King Plaudit until the three-quarters mark when Eternal, who was supposed to get his revenge in this race and prove his backers right about his ability, made his move. In the stretch, Sir Barton pulled out to a six-length lead and then Loftus eased the son of Star Shoot, flashing under the wire four lengths ahead of Eternal. In winning the Preakness, he did something that no one else had done at that time, winning the Kentucky Derby and the Preakness. At this point, only one other horse had made the trek from Louisville to Baltimore to New York, that being War Cloud in 1918, and only three others had traveled from Louisville to Baltimore for both races. Never had anyone won both. The double was quite a feat at the time.

Of course, Sir Barton would go on to win the Belmont a little over three weeks later and become our first Triple Crown winner. Despite his stellar credentials on the track, Sir Barton was less successful in the breeding shed. Eternal, for all of his lack of success in what we now know as the classics, made his mark on racing by siring enough good horses that he appears in the pedigrees of some of the 2016 Kentucky Derby starters.

Ninety-seven years ago today, we were that much closer to the racing world being changed forever. One more race laid between Sir Barton and immortality. Two more lie between Nyquist and his own place in racing history.