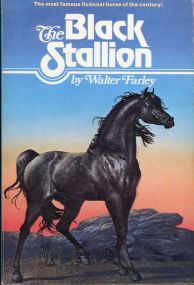 It all started with a book. This book, to be precise.

I suppose that’s how stories like mine often start, with a seminal event: a book, an image, something small. Something that might not mean anything to anyone else at that moment, but, to you, changes everything.

My teacher, Ms. Scott, read The Black Stallion out loud to my fifth-grade class that fall. The clouds of time obscure the specifics, but I remember it had to be the fall because another seminal moment happened about the same time. I had our television to myself on a Saturday, a rare treat indeed, and, as I flipped channels, I saw horses congregating on a dirt oval, entering the gate, and flying like lightning down the track. Entranced, I watched what had to have been an afternoon’s worth of racing, unable to catch names, but nevertheless addicted. (Later, I figured out it was the 1987 Breeder’s Cup.)

The following year was the first Kentucky Derby I ever watched on television. I watched a grey filly named Winning Colors with Gary Stevens on board beat the boys and then lose the Preakness and Belmont. I was already smitten with the sport before that, but I fell harder with each parade to the post. Every time the Triple Crown season rolled around again, I was there in front of my television. Names like the Flamingo Stakes, the Bluegrass Stakes, and the Wood Memorial became my mantra each spring. Epic stretch battles like Sunday Silence vs. Easy Goer marked my years. The Belmont stretch runs that turned us away from history ranked up there with middle school and high school and then college memories. In a sporty family, the games we played and watched dominated my days, but none held my heart the way that the equine set did — and still do.

Of course, in between all of those Triple Crown seasons, life evolved from a fifth-grade girl reading Walter Farley to a middle schooler drawing thoroughbreds in art class to a high schooler doing my first research paper on the Triple Crown. I wrote letters to the National Museum of Racing and Hall of Fame to ask about horses that I would read about since I lived in Alabama, a virtual thoroughbred racing desert, and because life at this point was still BG – before Google. I wrote my first book at twelve, this one about a female jockey, and dreamed of being one myself until I realized that I was too heavy for that (and that I had never ridden a horse). I continued working on her story, off and on, always rewriting, always wanting to make her shine. I even intended to write more in college, but that’s where my story veers a bit. I went to college and then graduate school, scoring a B.A. and M.A. in English, and then landed in the classroom, teaching writing classes at the college level. The love for racing was still there, but it laid dormant outside of watching the classics. Kids and work and life had necessitated pushing some things aside until opportunity rode in on the back of a long-gone horse named Sir Barton.

Life was making it clear to me that a change of path was necessary, but I felt like Harold with his Purple Crayon: I had an idea and I had the luxury of creating it myself, but that didn’t mean I knew how to get there.

What work would make me the happiest? My husband and I talked about things that we had always wanted to do, dream projects and the like. I told him about the list of books that I want to write and the book at the top was one about Sir Barton. I’ve read a number of books on racing and the Triple Crown, but I felt like I didn’t know anything about the first Triple Crown winner other than the rough outline shared in each book. I always thought his story had more to it than what I knew at that moment. I told my husband about Sir Barton, about the upcoming 100th anniversary of his achievement, and about my desire to learn more about him. I also suspected that no one book had told his whole story. I was right: after a couple of days of searching, I learned that no such book existed. My new job was on: to write a book about America’s first Triple Crown winner.

I had no idea where this would take me, but I knew I wanted to tell his story.

Here I am then, nearly four years after starting that enterprise. I’ve spent hundreds of hours with Sir Barton and his contemporaries, researching their careers, reading about their context, and writing with fervor. I have my head in two worlds: his and mine, the past and the now. I’ve returned to that girl with her Black Stallion books and her insatiable appetite for horses pounding down the stretch. I’ve lived long enough to see another Triple Crown winner FINALLY (with the hopes of more to come sooner than later). I’m still in Alabama, still in my desert, but now the desert has an oasis called the Internet thankfully. My office has a wall of horses and smattering of Sir Barton sprinkled with some other bits of life, but I’m back in my happy place again. This time, though, thanks to the Internet, I’m closer to my equine favorites and, even better, I get to share all of this with my family and friends, including you lovely people, both near and far.

That’s how I got here and, boy, I can’t wait to see where Sir Barton takes me from here.

Edit: In 2018, we had the sweet satisfaction of adding #13 to my list and thus all of my Triple Crown artwork is now outdated and I’m working to replace it. The wall has changed, my friends, and I can’t wait to see what’s next for us all.

8 thoughts on “How I Got Here”