This Saturday, Kentucky Derby winner Always Dreaming, Preakness Stakes winner Cloud Computing, and Belmont Stakes winner Tapwrit will square off in the mile-and-a-quarter Travers Stakes at Saratoga. Thirty-five years earlier, in 1982, the three classic winners — Gato Del Sol, Aloma’s Ruler, and Conquistador Cielo — all met in the Travers as well, but Runaway Groom, winner of the Prince of Wales Stakes in Canada, surprised them all in the stretch to win. In 1918, the Kentucky Derby, the Preakness, and the Belmont winners all faced off in the Travers Stakes at Saratoga, also with a surprising result.

Early on in 1918, Sun Briar had been one of the leading two-year-olds from the previous year looking to dominate again in his three-year-old season. Along with War Cloud, he was one of the early favorites for the Kentucky Derby, but an injury that spring meant that trainer Henry McDaniel would not have the colt ready for the Run for the Roses. Owner Willis Sharpe Kilmer was in danger of going without a Derby horse until he picked up the gangly gelding Exterminator in the weeks leading up to the race. Exterminator surprised everyone by winning the Kentucky Derby. Now Kilmer had two great horses in his barn: Exterminator and Sun Briar, but the owner still preferred his bay champion over the chestnut newcomer.

Exterminator was absent from the oversubscribed Preakness Stakes, which was run in two divisions. War Cloud won the first division and Jack Hare, Jr. the second. A month later, War Cloud tried for the Belmont Stakes, but tired after dueling with Cum Sah for the lead for the majority of the race. Johren, who would go on to win other long-distance races like the Lawrence Realization and the Saratoga Cup, outlasted the small field to win the Belmont. What was historic about this year was War Cloud’s path through his spring campaign: from the Derby to the Preakness to the Belmont, the Macomber colt had followed what would become the Triple Crown trail for the first time.

Eight weeks later, the three met at Saratoga. They all meet each other in one race or another before they were all done with racing for good, but this meeting in the Travers was one of those races that would help decide the three-year-old champion for 1918, much like this year’s Travers may do the same for 2017. Exterminator, War Cloud, and Johren all met Sun Briar at the barrier for this ten-furlong test. 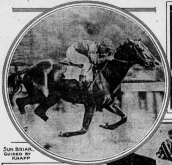 Sun Briar jumped out to the lead from the barrier, holding on to it for the first half of the race. Johren challenged him then, who managed to get a half-length lead on the Kilmer horse. Both War Cloud and Exterminator struggled behind them, both impeding each other and neither gaining much ground on the front runners. In the final quarter, jockey Willie Knapp, who would ride Upset to defeat Man o’ War the following year, called on Sun Briar to come on again and the colt did, managing to get a head in front of Johren as they approached the wire. Exterminator, Kilmer’s other great horse, finished last, unable to factor at all. Old Bones had yet to find his stride at long distances, but that would become the hallmark of his career soon enough.

Years later, Johren would receive the retroactive designation of three-year-old colt of the year; the official awards for division winners would not come for almost twenty more years. Of the four horses in the 1918 Travers, Exterminator would go on to become the most famous and was even considered briefly to participate in a match race with Man o’ War and Sir Barton in 1920, before Kilmer bowed out in protest of the distance and the weights. Johren would be retired to stud after his 1918 season, but would see little success in the breeding shed. War Cloud went on to a moderately successful season in 1919 before being shipped to France. He stood stud for Macomber there for three years before returning to the United States, where he was leased to Claiborne Farm. A paddock accident led to his death in 1923.

Of all of the horses in 1918 Travers, Sun Briar found the most success in the breeding shed, siring Sun Beau, Pompey, and Sun Egret among others. After their deaths, the two Kilmer horses were buried together in the Whispering Pines Pet Cemetary in Binghamton, New York.

If you would like to read more about Exterminator, I highly recommend Eliza McGraw’s book Here Comes Exterminator!, which dives deep into the celebrated career of Old Bones and features more on Sun Briar, Willis Sharpe Kilmer, and Henry McDaniel.

Look for my book, tentatively titled Sir Barton and the Birth of the American Triple Crown, from the University Press of Kentucky in spring 2019.