Ninety-nine years ago, a chestnut colt with a wide white blaze whipped across the finish line at Belmont Park, followed by only two others. Johnny Loftus might have waved his whip in celebration as his mount galloped out, finally trotting over to the judge’s stand to raucous waves of applause from the crowd of 25,000 straining to see the new champion. As Sir Barton received pats of congrats, as Commander Ross stood in the winner’s circle to receive the Belmont’s silver platter, horse racing was forever changed.

On June 11, 1919, Sir Barton won the first Triple Crown. On June 9, 2018, Justify, another chestnut colt with a wide white blaze, whipped across the finish line on the same fast track, with nine other horses behind him all covered in the famed sandy loam of Belmont Park. The thirteenth Triple Crown winner, Justify’s win completed an incredible season where he went from unraced to immortal in a scant 111 days. All Triple Crowns are historic, but, like Sir Barton’s win ninety-nine years ago, Justify’s place as #13 comes with firsts of its own, including the first horse to win the Triple Crown without racing at age two. The 150th Belmont Stakes was another race into immortality just like the 51st one was way back in 1919. 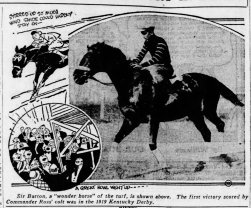 The story of how that chestnut colt became the first and brought us names like Citation, Secretariat, American Pharoah, and now Justify will be coming to bookshelves and your favorite online retailer just in time for the celebration of the 100th anniversary of Sir Barton’s triumph. After five years of research and writing, I am excited to partner with the University Press of Kentucky to bring you the full story of Sir Barton from his purple pedigree to his unforgettable duel with Man o’ War to his legacy as the first. Today, I am pleased to mark the 99th anniversary of Sir Barton’s Triple Crown and the arrival of Justify, the 13th Wonder, with the revelation of the title of my book:

Sir Barton and the Making of the Triple Crown

The book should make its debut in May 2019. Tell your friends and mark your calendars! I will be ramping up the excitement with my countdown to the book and the 100th anniversary.

(Much gratitude to Eric Kalet for the awesome photo of Justify’s finish in the 150th Belmont Stakes. Visit Eric at http://erickalet.zenfolio.com/)