The 20th century had two Big Reds: Man o’ War and Secretariat, both horses so dominant that they topped the list of the century’s greatest horses at numbers one and two. Both red chestnuts captured the hearts and imaginations of the people who watched them. Both inspired writers and verse to encapsulate their equine greatness, with multiple books devoted to their stories. These Big Reds stood at the top, their brilliant performances their legacy to the sport of horse racing. Behind those thrilling moments, though, lie their catalysts, the horses who might have finished second but drove those Big Reds to bigger and better. Among those were horses like Sir Barton and Sham.

For this month’s Book of Note, I wanted to read more about Sham, the colt who finished second to Secretariat in both the Kentucky Derby and the Preakness Stakes and challenged the big red colt in the Belmont, only to fall to last when repelled by that “tremendous machine.” In his own right, Sham was a champion and, had he been born in any other year, could have won the Triple Crown himself. But, like Alydar, he is better known for being second best. What Phil Dandrea does is take that shadowy form behind Secretariat and make him flesh and blood.

Dark bay and 16.2 hands, Sham was by Pretense, out of Sequoia, sharing Princequillo as a damsire with Secretariat. Pretense had started his career as a sprinter, but stretched out to become a champion handicapper at age four. His dam was a stakes winner herself who had full sisters that won both the Kentucky Oaks and the Coaching Club American Oaks. Sham’s pedigree was built for stamina; he would stalk the pace and then come on with a closing rush. Bred by Claiborne Farm, he was part of Claiborne’s excellent racing stock at age two, trained by the legendary Woody Stephens, until Bull Hancock’s untimely death in late 1972. Claiborne was forced to sell its horses in training in order to pay estate taxes and preserve the legendary breeding stock. Seth Hancock desperately wanted to keep Sham, knowing the colt’s potential and his father’s fondness for the easy-going colt, but the son of Pretense had to go, sold to Sigmund and Viola Summers for $200,000.

At three, now trained by Frank “Pancho” Martin, Sham showed even more potential in the run-up to the Kentucky Derby, winning the Santa Anita Derby and finishing a fast-closing second (by a head) in the Wood Memorial. He was the favorite for the 1973 Kentucky Derby, with Secretariat as the second choice by only a few thousand dollars. At the start, Sham’s mouth slammed into the doors of the starting gate, dislodging two teeth and leaving the colt with blood gushing from his mouth. Despite this, Sham ran a brilliant race, stalking the pace and taking the lead as they rounded the final turn into the stretch. Yet, as he made his final run, one that would be a winning one in any other year, Secretariat took the outside path, catching up to Sham and then passing him to win by 2 1/2 lengths. The final time? 1:59 2/5, besting the Kentucky Derby’s previous record of 2:00. Though his time was not recorded, Sham’s position behind Secretariat put him potentially ALSO running the race in a sub-2:00 time, a record time on its own — but records don’t belong to second place. 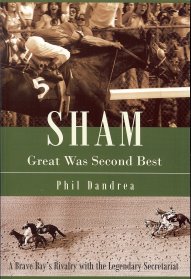 Dandrea takes moments from Sham’s career like this one and balances the overweening influence of Secretariat with Sham’s performances in races like this one. Even when Secretariat is not in the race, his shadow looms large over Sham; Dandrea can’t profile one without the presence of the other. We can never know Sham without Big Red so Sham’s story has to always contend with the influence of the Triple Crown winner. Yet Dandrea is able to tell Sham’s story with fondness, through the words of his trainer, his owners, his jockeys, and his grooms. Those who knew Sham loved him and, by book’s end, I came to love him as well. Dandrea gives us as complete an overview of Sham’s career as he can, showing us both the champion and the colt, the athlete and the pet that won over the hearts of the humans that worked with him. Sham: Great Was Second Best showed me how great meets immortal and cements his own legend in the process.

Sham: Great Was Second Best by Phil Dandrea is available at Amazon, Barnes & Noble, and even at the Secretariat store!

One thought on “Books of Note: Sham: Great Was Second Best”