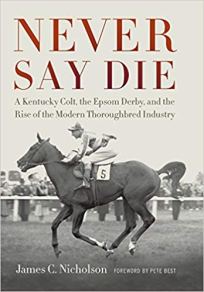 My Book of Note for March is Never Say Die by Jamie Nicholson, a book about the winner of the 1954 Epsom Derby. Never Say Die’s victory marked the swing in how the thoroughbred industry regarded American breeding versus that of their European counterparts. The story of Never Say Die’s Derby win weaves together disparate threads of a story, from the genesis of the Beatles to the controversial figure behind the Singer Manufacturing Company.

Author Jamie Nicholson was kind enough to answer some questions about the book and his family’s Jonabell Farm (now part of Darley America), where Never Say Die was bred. Here are Jamie’s Author Answers!

There was a small picture of Never Say Die hanging on the wall in the hallway outside the kitchen in my grandparents’ house. I remember asking about it when I was young. The gist of the explanation I got was that he won the Epsom Derby and was raised on the farm many years earlier (when the farm consisted of leased acreage at Hamburg Place). I was left with a vague understanding that the horse was owned by a man who had something to do with the invention of the sewing machine. Any historical significance of a Kentucky-bred colt winning England’s great race certainly wasn’t anything that was brought to my attention. Decades later, my dad heard an interview of original Beatles drummer Pete Best on NPR in which Best explained how his mother’s bet on the horse impacted the early history of the Beatles. So it was my dad who reintroduced me to the story.

What was the most surprising thing you learned in your research for this book?

I learned that it was possible for someone—specifically, nineteenth-century sewing machine manufacturer Isaac Singer—to maintain marriages with three different women in the same city, each unbeknownst to the others, fathering some two dozen children. He founded one of the first American multinational corporate conglomerates, which sold millions of sewing machines worldwide. But his aptitude in the fields of deceit and treachery was equally impressive to me.

This book weaves together many threads that seem unrelated on the surface. Talk a little about writing this book and figuring out how to tie these subjects together. Where did your biggest challenges lie?

With this project, I was starting with a set of anecdotal tidbits—a foal saved at birth by a drink of whiskey; jewelry pawned to fund a longshot bet on that horse, the proceeds of which paid for the bettor’s dream house; the introduction of Pete Best to his future Beatles bandmates at that house. The main challenge was to maintain a narrative thread while also incorporating the tangential backstories that illustrate the global economic and political dynamics that made Never Say Die’s Derby win possible. It’s a balancing act to try to tell an entertaining story while also trying to answer that all-important question for historians – “So what?” An analogy would be the tour guide who wants to point out all the pretty flowers and tell the histories of all the buildings along the way but must also get the tour group back to the bus by noon.

Have you ever been to the Epsom Derby? How does it compare to the Kentucky Derby, whose history you also have written about?

I haven’t been to the Epsom Derby, so I can’t speak to that in terms of personal experience. But I have been to the Oaks at Epsom, so I can clumsily compare Epsom Downs and Churchill Downs as sites of the two iconic events. To me the main difference lies in the physical settings of the venues. Churchill Downs, home of the Kentucky Derby, is situated amid suburban sprawl. The huge crowds on Derby day are a crucial part of the atmosphere, and the action on the racetrack seems to match the frenetic energy of the surroundings. By contrast, Epsom Downs is a park-like setting in Surrey, England, with views of hills, trees, and grass from the grandstand. From what I gather on TV, there is a more tranquil atmosphere there on Derby day than at Churchill Downs. The Epsom Derby is a physically demanding and beautiful race, with its undulating course, meandering turns, and dramatic uphill finish. But with the exception of Tattenham Corner, it’s perhaps not as chaotic as the Kentucky version, for better or worse.

A number of excellent horses were bred at or stood stud at Jonabell Farm during your family’s tenure there. Which ones were your favorites? Why?

When I was little, my favorite stallion there was Bailjumper. I liked the image his name conjured in my innocent young mind of a spry horse leaping over bales of straw. I also liked Vigors because he was gray. When I was a teenager, working there summers and weekends, Jonabell was probably punching a bit over its weight in terms of its stallion roster. So that was a fun time to be around. It was a big deal for a farm that size to have stallions like Affirmed and Holy Bull. And it was fun to notify Affirmed that Silver Charm and Real Quiet had failed in their Triple Crown bids. I don’t think he was particularly moved by the news, but he seemed happy enough to have a visitor on those Saturday evenings. My favorite runner bred on the farm was Epitome. She won the Breeders’ Cup Juvenile Fillies in 1987. And her 1999 colt, Essence of Dubai, was the most impressive yearling I had seen. He became a very nice stakes winner, but as a yearling he seemed like a different species, like he already belonged on a racetrack.

Thank you, Jamie, for your contribution to and support of the Sir Barton Project! In addition to Never Say Die, Jamie has written about the Kentucky Derby and famed prizefighter John Morrissey. You can find Jamie’s roster of books here.