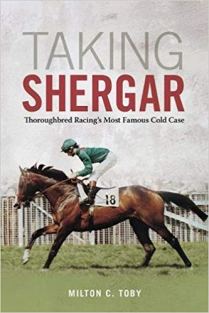 For my final Books of Note prior to the publication of Sir Barton and the Making of the Triple Crown, I wanted to spotlight Taking Shergar, the first book published under the Horses in History imprint from the University Press of Kentucky. Much like Jamie Nicholson’s book Never Say Die, Milt Toby tells the story that starts with a horse and ends with a story woven together from unexpected threads, a mystery that only a storyteller like Toby can truly tell.

I knew of Shergar as racing’s most famous cold case, a horse kidnapped for ransom and never recovered. However, like most mysteries, I discovered that this one has so much more to it than I thought.

The thing about mysteries is, they aren’t stories with a neat beginning, middle, and end. They have fits and starts, with information revealed in fits and starts as new threads are discovered and then woven into the known. Toby’s background as a lawyer gives him the tools to understand how disparate information comes together to create a cohesive picture of an incident. His book, Dancer’s Image: The Forgotten Story of the 1968 Kentucky Derby, pieces together the events that brought Dancer’s Image and his connections from the top of the world down to the realities of questionable drug testing and the politics of America in that era. When I learned that Toby had taken on the story of Shergar and his mysterious disappearance, I knew that book would be an expert distillation of both the knowns and unknowns from that 1983 kidnapping.

Shergar won the 1981 Epsom Derby by 10 lengths, still a record margin to this day. He would win the Irish Derby and then the King George IV and Queen Elizabeth Stakes before finishing fourth in his final start. His owner the Aga Khan syndicated Shergar, retaining six shares of the stallion and then standing him at Ballymany Stud in Ireland, rather than selling him to American breeders. Keeping Shergar in Ireland helped the Irish population in general maintain a sense of ownership of the horse — but also made him a target. During this early part of the 1980s, the Troubles, the conflict between the Irish Republican Army and the British, was still at a fever pitch. In an effort to roust the British from Northern Ireland, an arm of the IRA known as the Provisional Irish Republican Arms, or the Provos, used guerrilla war tactics to continuously pressure the British and make a united Ireland possible. In order to purchase weapons, the Provos needed money and decided to use kidnappings for ransom as a quick way to raise funds.

Ballymany Stud was not a secure facility so it was easy for the men in balaclavas to drive a ragtag horse trailer onto the property on February 8, 1983. They first kidnapped Shergar’s groom Jim Fitzgerald and then forced him to help them load a confused stallion onto the trailer. Fitzgerald himself was then pushed onto the floor of a van and driven around in circles while the horse trailer carrying Shergar drove off in a different direction. The horse was never seen again, though negotiations for his ransom and release went on for some time after. Toby includes one photograph that the kidnappers supposedly shared with the syndicate as they negotiated for Shergar’s ransom and release. That photo chills me every time I look at it.

The book then details the investigation behind Shergar’s abduction, the likely suspects, and then some of the extraordinary measures that members of the syndicate went through both to find the horse and then to recover any sort of compensation once they assumed Shergar was lost. Like so many true-life mysteries, the story does not end well for anyone: the horse lost, money never recovered, and difficult decisions and realities for all involved. Toby ties all of these threads together, reporting information while resisting the urge to speculate. What readers are left with is a new perspective on a time period they may not be familiar with, depending on their age. Shergar was a talented horse with classics wins, but his story with all of its attendant ups and downs must be considered within the context of his time, a context that is ably detailed through Toby’s writing.

That photograph, though, chills me still as does the thought of what the horse might have endured. I am left with the anguish of those who loved him while also intrigued by the complexities of mystery that demands to be solved to this day.

Order Taking Shergar from your favorite bookseller. Find more on Milt Toby and his books at his website, MiltonCToby.com. The Horses in History imprint is a series from the University Press of Kentucky.

One thought on “Books of Note: Taking Shergar”