The Kentucky Derby Museum, the Keeneland Library, Audley Farm, Long Branch Historic House and Farm, and the National Museum of Racing and Hall of Fame.

From Kentucky to Alabama to Maryland to Virginia to New York, thousands of miles via my trusty minivan or leaving on a jet plane.

2019 has been quite a year. When I started writing Sir Barton’s story, I had just quit my adjunct teaching position at UAH. My kids were 3 and 7. I had no publisher and no guarantee that I would find one. I knew no one in the horse racing industry and operated on the faith that a book on America’s first Triple Crown winner was something that the sport wanted. As a historian, I knew this book was needed, but how it would be received, heck, how I would be received was a giant question mark. I felt like I was nobody, but I knew I had the tenacity, the perseverance, and the skills necessary to do the job. I plunged headlong into the writing with nothing but my husband’s support and his trust that I could do this thing.

The first time I went to the Keeneland Library, I met Cathy Schenk, who kindly helped me learn my way around and start the daunting task of winding my way through their research on Sir Barton. When I returned a second time to continue my research, Cathy said she knew I would finish this because I had come back. “So many writers do not once they find how intimidating this can be,” she explained. I made several more trips to Keeneland and now feel like I’m walking into the bar on Cheers each time I visit.

I spent hours on the Daily Racing Form archive and Newspapers.com. I wrote emails and requested information from anyone who I thought might have something helpful. I requested so many books from my library that the librarian in charge of interlibrary loan asked what I was working on. I tracked down family members from all of the major players. I started social media accounts and worked on connecting to other fans of the sport in the hopes of ginning up interest in my project. I started this blog and wrote a book proposal, sending it out to a number of agents (and the same number of rejections). Finally, I was able to connect with the University Press of Kentucky and their wonderful team. I finished writing on October 3, 2017.

Six months of revising and editing and furiously collecting photographs later, I submitted the manuscript. I somehow got the great Steve Haskin to write the foreword. I counted nearly 1000 citations, all meticulously documented in Chicago style. I resolved the copy edits and then proofread the book at least twice over after I received the galleys. I cried when I received the cover and then again when I saw the galleys. I cried harder when a box landed on my doorstep on April 2, 2019, with actual copies of Sir Barton’s story. Nearly six years after I got the idea to write this book, it was reality. Tangible. And it had my name on it.

People ordered it. They read it. They reviewed it. They came to hear me talk about Sammy, sign a book, and then chat. I had the privilege of meeting people I admired and getting to know as many people as I could. My copy of the book is covered in signatures: Steve Haskin, Bob Baffert, Mike Smith, Steve Asmussen, Jean Cruget, Chris McCarron, Steve Cauthen, Caton Bredar, and more. (Still missing Steve Byk!) This year has been humbling and thrilling and more, experiences that I shared with my husband and kids (now 8 and 12) whenever I could.

As 2019 winds to a close, I look forward to a new year and a new project. The Sir Barton Project will be rolled into a portfolio site as I work on what’s next. More books and more research are in my future, as I work to preserve the history of horse racing, especially the Triple Crown. I look forward to chances to collaborate and to write, whatever I can do to contribute to the sport I love.

As 2019 draws to its inevitable conclusion, I cannot express my gratitude to every person who made this possible, who picked up a book, who reached out to me, who shared their love for the horses and the sport, and who helped me share Sir Barton’s story with the world. I sit in awe of you all, with tears of joy and a full heart. Thank you for being a part of this amazing year! 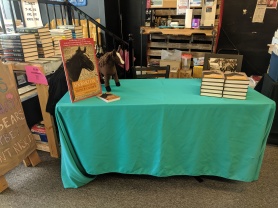