100 years ago, 1920 — The Maryland state legislature was considering the Burke Measure, also known the Burke-Janney law, creating the Maryland Racing Commission and putting racing in the state of Maryland under more state oversight. Once the bill passed, the state’s racetracks — Havre de Grace, Bowie, Pimlico, and Laurel — shared 100 racing days a year and were required to pay $6,000 a day in taxes to the state.

Read more about that in Sir Barton and the Making of the Triple Crown, chapter 11.

75 years ago, 1945 — Racetracks in the United States were dark on orders of the War Department. In England, however, Ascot was open, leaving American soldiers wondering why the Brits were able to race when racing here had been closed for the duration.

Read the article in the Louisville Courier-Journal, April 3, 1970.

The dark, dank trenches of France behind him, imagine your doughboy stepping off a ship onto American soil. For the first time in many months, he is back in his own country, but he can’t come home to you just yet. Instead, he reports to his unit’s headquarters and finds himself surrounded by frantic doctors and nurses trying to squelch an epidemic.

In the late fall of 1918, as the Great War was winding down and American soldiers were boarding ships back to the United States, they brought with them an unwelcome gift: a new and more virulent strain of the Spanish flu. The previous spring had seen an outbreak of the same flu, but the intervening months had mutated the virus into something more deadly, striking the young and healthy as it spread among soldiers and then civilians so quickly that it overwhelmed cities.

In 1918, the horse racing world was much smaller than it is today. By the fall, events like the Kentucky Derby and Saratoga’s late summer meet had already come and gone, but meets at Latonia in northern Kentucky and Laurel in Maryland were at the mercy of measures that governments had to take to stem the tide of this deadly epidemic.

By early October, newspapers were awash in reports about the outbreak of this new strain of the flu, detailing the rise in cases as well as the measures being taken to treat those stricken. Wartime policies had prevented the spread of information about the virus’s movements until it was too late in some areas. The city of Philadelphia had gone ahead with a parade celebrating Liberty Bonds, which the government had sold to help fund the war effort. Days later, a spike in reported flu cases were a direct result of that decision.

That realization led local authorities in both Maryland and Kentucky to limit public gatherings in that crucial first part of October. That meant that both Laurel and Latonia would have to wait. This delayed a number of stakes races, including the match race between two-year-olds Billy Kelly and Eternal that was to decide the best juvenile of the year. The Daily Racing Form updated readers on the latest regarding each meet, optimistically reporting each time the ban might be lifted.

Finally, the bans were lifted in late October, allowing each meet to go forward. Both were delayed by two or three weeks, but racing resumed nevertheless and quickly returned to normal. The Spanish flu would linger for another six months, with another outbreak in the spring of 1919. By that point, the virus had again evolved to a less serious version, marking the end of a nightmarish epidemic in the United States. No corner of the country had been untouched by the Spanish flu: even President Woodrow Wilson endured his own case as he prepared to sign the Treaty of Versailles.

Our ability to diagnose viral infections and understand how they spread is years from where it was a century ago. This knowledge means that we know what we need to do to deal with an epidemic like the COVID-19, including something unprecedented for most of us: the cancellation or postponement of our favorite sports. While we wait for the First Saturday in September and mourn the loss of familiar joys, let us remember that racing eventually returned to normal in 1918 and that will happen again in 2020.

Pete Fornatale and Jonathon Kinchen have a brilliant podcast called the In the Money Podcast, where they talk about handicapping, racing previews, and more. I recently appeared on the show to talk about books, artwork, and other gift ideas for the horse racing person in your life. Here are the books that I recommended!

END_OF_DOCUMENT_TOKEN_TO_BE_REPLACED

Happy Giving Tuesday! With Thanksgiving behind us and the winter holidays in front of us, Giving Tuesday is a day to celebrate those who make a difference in our communities by giving a little to help them continue their missions. If you are looking for racing-related charities to give to today, look no further! Here is a list of some worthwhile organzations doing great work in all aspects of the sport:

These are only a few of the many organizations out there, but I know all of these will appreciate any and all donations. Big or small, whatever you can give will find its use in many worthwhile initiatives that benefit both the horses and the humans of our sport. I hope you will consider giving on this Giving Tuesday!

The Kentucky Derby Museum, the Keeneland Library, Audley Farm, Long Branch Historic House and Farm, and the National Museum of Racing and Hall of Fame.

From Kentucky to Alabama to Maryland to Virginia to New York, thousands of miles via my trusty minivan or leaving on a jet plane.

END_OF_DOCUMENT_TOKEN_TO_BE_REPLACED 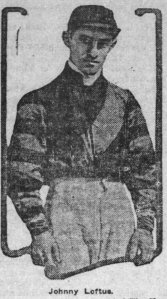 By early November, 1919 had become a year of mixed blessings for jockey Johnny Loftus. He had been aboard Man o’ War for all of his victories — and his lone defeat. Loftus had ridden winners for a number of racing’s top stables and trainers, everyone from Sam Hildreth to H.G. Bedwell. He had won a Kentucky Derby on Sir Barton but also lost the Dwyer Stakes to Purchase, who Loftus also had ridden to victory that year. Loftus had been set down for rough riding, yet he also had served as trainer Louis Feustel’s go-to rider for a fractious and challenging Man o’ War. With the year winding down, Loftus was looking forward to 1920, possibly his final year in the saddle. Years of fighting his weight left the jockey ready to consider what’s next. In the meantime, he was ready to finish out 1919 on a high note.

The Autumn Handicap on November 5th would prove to be anything but.

END_OF_DOCUMENT_TOKEN_TO_BE_REPLACED

Thanks to my friend Judy Jones, herself a talented artist and horse lover, I was able to pop into the Red Mile, a one-mile harness racing track located near the University of Kentucky in Lexington. What an evening!

END_OF_DOCUMENT_TOKEN_TO_BE_REPLACED

Gnome was a horse on a hot streak. Coming off a win in the Champlain Handicap, the chestnut colt counted the great Exterminator amongst those he had beaten at Saratoga that August. Now, still the beneficiary of a break in weights, Gnome faced the barrier alongside Sir Barton.

Sir Barton had started August with a track record in the Saratoga Handicap at a mile and a quarter. He had then run that distance again at Fort Erie, winning easily, but now he was back at Saratoga for this race, the Merchants and Citizens Handicap. Again laden with 133 pounds, Commander Ross’s champion horse stood at the barrier, Gnome to his left and Jack Stuart to his right. Ahead lay a mile and three-sixteenths. One more race, another step closer to a potential meeting with the juggernaut that was Man o’ War.

Ninety-nine years ago, Sir Barton and Gnome met on the Saratoga oval for a record-setting performance, a finish so close that only the judges could determine the winner. Luckily photographer Charles Cook snapped the combatants as they battled to the wire.

A world record, a close finish, and a die cast for a match race. Read more about Sir Barton’s turn in the Merchants and Citizens Handicap in Sir Barton and the Making of the Triple Crown (Chapter 13).

The 150th edition of the Travers Stakes, the Midsummer Derby for three-year-olds, will be run at Saratoga Race Course this Saturday. The Travers trophy has legendary origins of its own, as I discussed here, but 2019 features something new for racing fans: an epic book on the history of the Travers Stakes, written by Brien Bouyea and Michael Veitch.

END_OF_DOCUMENT_TOKEN_TO_BE_REPLACED

I have the privilege of visiting Saratoga Spring, New York and the National Museum of Racing and Hall of Fame this weekend for two events:

Author Talk: Sir Barton and the Making of the Triple Crown — Friday, August 16th at 6:30 pm. After my presentation, I will be signing books.

Saturday Morning Socials — Lenny Shulman, author of Justify: 111 Days to Triple Crown Glory, and I will be signing books at the Museum before the day’s races at Saratoga. (9:30 – 11:30 am)

I hope you can come by and see me! I would love to talk about all things Sir Barton and racing history with you!